Old school preworkout formula with the perfect synergy of PUMP, FOCUS and ENERGY.

Amino Smart Hydra Charge – The pre-workout market is awash with concentrated micro formulas with rather exotic ingredients. Many of these concentrated formulas contain relatively low levels of the key ingredients one might expect to see a in pre-workout powder and in some cases rely heavily on novel stimulant ingredients for their “kick”. The original pre-workout formulas from the early 2000s were all based around using very specific ingredients in large amounts to create the perfect synergy of PUMP, FOCUS and ENERGY. As the saying goes, there is no school like the old school, so we at AMINO SMART decided to go back to the drawing board and devise a pre-workout formula from tried and tested honest ingredients in the proper effective doses.

Each Serving of HYDRA CHARGE contains the following:

There are literally hundreds of studies on the benefits of creatine monohydrate and its effects on performance and explosive movements, especially significant increases in muscle strength and overall power output when consumed for several weeks at doses of 5grams a day. If you are involved in any form of resistance exercise, you’ll most certainly benefit from increased ATP (Adenosine triphosphate) levels.

This ingredient is key to maximising blood flow to the muscles through a 3-stage process, Citrulline is converted to Arginine and Arginine is converted to Nitric Oxide (NO) In the bloodstream. Aiding the vasodilating or PUMP EFFECT when you exercise, especially if you are weight training.

This often-misunderstood amino acid has several benefits. Clinical research suggests that Beta Alanine can increase strength, power but has a very noticeable effect on endurance also. Increased when used in conjunction with creatine monohydrate.

When combined with caffeine and choline bitartrate, L-Tyrosine has a profound effect on alertness, mental focus, energy and endurance.

Did you ever feel you may have been in a “flow state” or felt a “mind muscle connection” when you exercised or played sports? it’s probably because you had healthy levels of choline to supply your brain. Choline plays a critical role in brain, nervous system and muscle function. Choline Bitartrate can boost reaction time, focus and that zoned feeling you get when you train.

Additionally find out more about the product here. 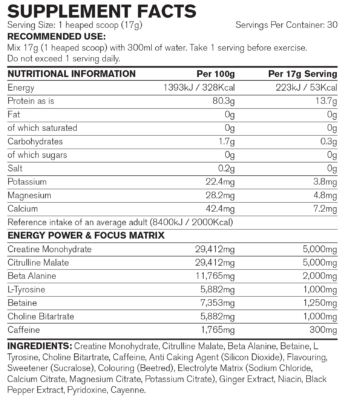