When you need that bit of additional help to remove the fat and unveil the physique you desire, then look no further.

L-Tyrosine – is an amino acid that is used to produce noradrenaline and dopamine; it appears to reduce stress during exposure to acute stressors. When you’re under stress, your neurotransmitter bank account can start to run low. But if you have plenty of tyrosine in your bloodstream, that extra stash will replenish the neurotransmitters before stress can deplete them, allowing you to stay sharp for longer without getting burned out.
L-Carnitine L Tartrate – is one of the most common forms of L-Carnitine found in sports nutrition due to its rapid absorption rate. It is responsible for transporting long-chain fatty acids to your cells’ mitochondria, where energy is then produced as the fat is oxidised and used for fuel. Evidence suggests it may promote weight loss by increasing calorie expenditure.
Acetyl L Carnitine – has an acetyl group attached to the carnitine molecule. This allows it to pass through the blood-brain barrier making it the most bio-available, and thus most easily absorbed form. So used alongside L-Carnitine L Tartrate we cover all bases of the body’s absorption capabilities.

Increases the release of the neurotransmitter acetylcholine and facilitates learning and memory. In athletes, Alpha-GPC supplementation prevents exercise-induced reductions in choline levels, increases endurance performance and growth hormone secretion.
Jugulans – is the 2-Amino-5-Methylheptane version of DMHA, which is obtained through an extract in the bark of the English Walnut Tree. It is a powerful psychoactive mental stimulant that increases mental energy and focus also causing you an increase in mood, and an increase in cognitive capacity.
Caffeine Anhydrous – crosses the blood-brain barrier easily, making it a very psychoactive substance. Inside the brain, caffeine counteracts the substance adenosine. Adenosine is responsible for inhibiting nervous system activity. Caffeine binds to the adenosine receptors and essentially stops adenosine from putting the brakes on neural activity. This translates to users experiencing more energy, more alertness and less fatigue.

Crosses the blood brain barrier and functions as a monoamine oxidase (MAO B) inhibitor. Benefits include balancing the output of the adrenal glands, improving mood and producing an intense sense of drive and ambition.
Active TR Caffeine – unique micro-encapsulated product that provides a delayed pulsatile release (over several hours) helping prevent overdosing. Proven to deliver improved results for athletes, including better performance over four hours, fast recovery and enhanced muscle protein synthesis. Users will continue to benefit from its effects long after the initial dosing, for prolonged fat burning effects.
Grains of Paradise – natural fat burner which has been shown to help burn fat, reduce a person’s appetite and boost their metabolism. In numerous studies, Grains of Paradise has been shown to help regulate blood sugar levels via activation of brown fat. The steadier the blood sugar levels, the easier it is for the body to be able to utilise fat stores for energy.
B3 – The vitamin niacin (B3, or nicotinic acid), is known for its cholesterol-lowering effects. May also reduce central or abdominal fat accumulation.
Bioperine – improves nutrient absorption so when taken along with other supplements it increases their overall effectiveness. 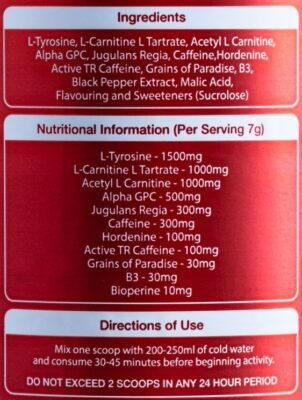