Once consumed, some converted to another amino acid called arginine.  Arginine converted into a molecule called nitric oxide, which causes vasodilation of blood vessels by relaxing the smooth muscle cells that constrict them.  Shown to improve muscle building through enhanced nutrient delivery.

Shown to enhance muscular endurance. When ingested, Beta-alanine turns into the molecule carnosine, which acts as an acid buffer in the body to protect from exercise-induced lactic acid production.

Next to glutamine, taurine is the second most abundant amino acid found in skeletal muscle (especially in fast twitch fibers).  Existing in very high concentration in the brain and plays a neuromodulatory role in this area.  Taurine alters the actions of inhibitory neurotransmitters like GABA, which is suggested to be the mechanism for increased focus noted with taurine supplementation.   Of importance to bodybuilders, shown to increase brain performance, focus, and time on task.

An amino acid used to produce noradrenaline and dopamine. Appears to reduce stress during exposure to acute stressors.  When you’re under stress, your neurotransmitter bank account can start to run low. But if you have plenty of tyrosine in your bloodstream, that extra stash will replenish the neurotransmitters before stress can deplete them – sharp for longer without burn out.

Patented and scientifically engineered to deliver benefits essential to peak sports performance. Nitrosigine is a powerful and safe non-stimulant ingredient that has been clinically studied for safety and efficacy.  It significantly boosts nitric oxide levels, a key factor for increasing blood flow to working muscles which will boost muscle pump and an increase in muscle volume.

Crosses the blood-brain barrier easily, making it a very psychoactive substance. Inside the brain, caffeine counteracts the substance adenosine. Adenosine is responsible for inhibiting nervous system activity. Caffeine binds to the adenosine receptors and essentially stops adenosine from putting the brakes on neural activity.  This translates to users experiencing more energy, more alertness and less fatigue.

Also known as ascorbic acid, is necessary for the growth, development and repair of all bodily tissues.  Involved in many functions within the body such as protection of the immune system, the heart, the eyes and even skin health.

Involved in the electrical signals sent by muscles to allow them to contract properly.  When potassium levels get low, you can get muscle weakness and cramps.

Retains all essential minerals that may be lost through the purification of common table salt.  Supplementing pre-workout will help replace electrolytes lost through sweating thus keeping the muscles hydrated and performing optimally.

Also crosses the blood brain barrier and functions as a monoamine oxidase (MAO B) inhibitor. Hordenine effects and benefits include balancing the output of the adrenal glands, improving mood and producing an intense sense of drive and ambition. 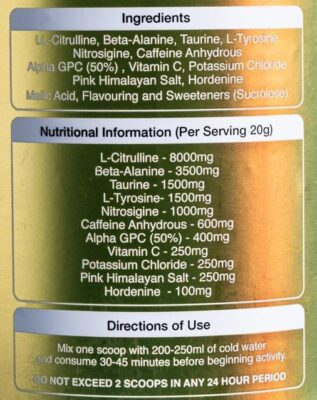 Also check out other products in the range here.
Additionally find out more about the brand here.