“a state of minimal activity, characterized by low body-temperature, slow breathing and heart-rate and low metabolic rate”
High quality sleep is essential to the recovery of the mind and body and is so often overlooked. Not anymore with this ultimate deep sleep and relaxation aid.

L-Tryptophan – is an essential amino acid that helps the body make proteins and certain brain-signaling chemicals. Your body changes L-tryptophan into a brain chemical called serotonin. Serotonin helps control your mood and sleep.
Alpha GPC – (L-alpha-glycerylphosphorylcholine) has been brought to the attention of the public due to recent studies supporting its ability to improve memory function. It has been demonstrated to improve mental focus, increase awareness and attention. It is also involved with lucid dreaming during REM sleep for enhanced learning during dream states. Choline is known to be important for memory functions as it is a component of the neurotransmitter acetylcholine responsible for short-term memory.
Lion’s Mane – As our bodies prepare for our natural transition to sleep, our bodies should activate the parasympathetic nervous system, and subsequently turn off our fight or flight mode. It’s not uncommon for modern humans to struggle with making this natural transition. A number of factors, such as exposure to blue light, poor diet, and stress can cause our fight or flight modes to persist, making sleep occasionally difficult. Lion’s mane before bed is an excellent adjunct to your lifestyle as it has been shown to be a regulator, and may be regarded as a helper to the body.

Ashwagandha root extract is long known for its potential in helping sleep quality. Even the herb’s botanical name, “withania somnifera” is indicative of this important benefit. Users show a decrease in the stress hormone cortisol in the blood, which promotes a greater feeling of ease. Ashwagandha can improve all measures of sleep such as onset latency, sleep efficiency, total sleep time, and waking after sleep onset.
Magnesium Bisglycinate – its ability to induce muscle relaxation and ease stress are two of the main ways it’s thought to help people fall asleep faster. Research shows that magnesium can also help us stay asleep longer. Magnesium reduces the stress of the nervous system and promoting a steady state of relaxation. Supplement can promote a healthy circadian rhythm, meaning it can help our bodies get into a more natural sleep cycle and wake up feeling more refreshed.
Bacopa Monnieri 55% Bacosides – had an anxiolytic effect, simply meaning an anti-anxiety effect. Participants in clinical trials experienced reduced heart rates and anxiety levels. These physiological effects point to the adaptogen potential of Bacopa monnieri. Bacopa monnieri’s calming effect may also be attributed to its modulation of serotonin levels, which it has been shown to regulate.

In the central nervous system, zinc is the second most abundant trace metal. Involved in many processes. Also plays a major role in cell signalling and modulation of neuronal activities and is proven to promote calm and sleep. Recent research has concluded that zinc serum concentration varies with the amount of sleep. While orally administered zinc increases the amount and the quality of sleep in mice and humans.
5 HTP – works in the brain and central nervous system by increasing the production of the chemical serotonin. Serotonin can be converted into the hormone melatonin, which plays an important role in regulating sleep. Its levels begin to rise in the evening to promote sleep and fall in the morning to help wake you up. Therefore, supplementing with 5-HTP may promote sleep by increasing melatonin production in your body.
L-Theanine – Evidence from human electroencephalograph (EEG) studies show that it has a direct effect on the brain. As such significantly increases activity in the alpha frequency band which indicates that it relaxes the mind. Can help with falling asleep quicker and a longer, deeper sleep.
Vitamin B6 – aids in the production of the hormones serotonin and melatonin. Both of which are important to sound, restful sleep. 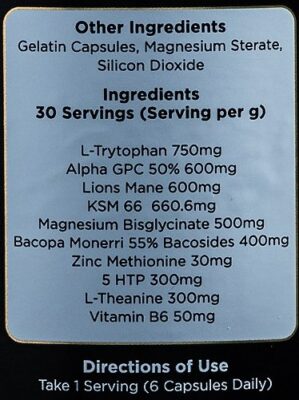