Trained By JP Sustain Intra – the ingestion of carbohydrates (CHO) before, during, and after exercise can effectively improve performance, primarily by its contribution to maintaining high blood glucose concentrations. The International Society of Sports Nutrition set the recommended amount of CHO ingested for rapid restoration of glycogen at carbohydrate refeeding of 1.2 g/kg bodyweight/hr. The recommendations suggest 1-2 g/kg BW CHO 3-4 hr prior to exercise, and 30 – 60 g/kg BW/hr CHO during exercise.

HBCD (highly branched cyclic dextrin) is a novel type of maltodextrin produced from waxy corn starch by the cyclization reaction of a branching enzyme. This gives HBCD a relatively high molecular weight than other conventional maltodextrins and because of this controlled structure, HBCD is highly soluble and stable in water, does not have an unfavorable smell or taste in solution, and has low osmotic pressure. Osmotic pressure is an important factor that determines the gastric emptying rate of a drink. HBCD has a higher gastric emptying rate than glucose and maltodextrin based carbohydrate drinks at rest and during exercise; and studies have reported less discomfort during exercise when they received an HBCD-based drink compared to a glucose- or maltodextrin-based drink as glucose and maltodextrin solutions may remain in the stomach much longer compared to the HBCD solution.

This might result then in slower water absorption from the intestine and reduced performance form either dehydration or gastrointestinal disturbances such as flatulence, nausea, and abdominal pain. Fatigue during exercise can be further influenced then by factors including inadequate muscle glycogen levels, metabolic disturbances within muscle tissue, and neurological alterations.

Research has demonstrated that L-Alanyl-L-Glutamine dipeptide can enhance fluid and electrolyte absorption in the gut, especially at a low pH, which is common during exercise and that when consumed by subjects during a mild hydration stress (-2.5% of body mass loss) exercise can be prolonged to a greater extent than with water ingestion only. L-citrulline ingestion during exercise may also help reduce nitric oxide-mediated pancreatic insulin secretion or increased insulin clearance to maintain stable blood glucose levels.

To enhance intra workout creatine phosphate synthesis, a readily absorbed dose of 500mg Creapure® Patented Creatine Monohydrate is included in Sustain. More so, when insulin is present in physiologically high or supraphysiological concentrations (elevated blood glucose concetration) there is an insulin-mediated increase in muscle creatine transport which can further enhance muscle creatine accumulation in humans. Creatine has also been shown to enhance glucose oxidation. AMP-activated protein kinase (AMPK) has been established as a protein that monitors the metabolic and energetic states of the muscle cells and creatine can mediate its glucose disposal effects by potentially increasing AMPK activation and increasing glucose uptake demand.

Alongside creatine monohydrate, 500mg Betaine Anhydrous has been included to support homocysteine recycling, gene methylation and cell repair. Betaine donates methyl groups (CH3), which are required for over 100 different reactions essential for normal cell function in the human body. These functions include the synthesis of creatine, carnitine, and epinephrine – all of which are known to play a role in enhanced physical performance.

Also Betaine can accumulate in cells to protect against stress by forming a monolayer of water around essential cell components. Such as enzymes which can help to maintain cell volume and function during dehydration, heat or metabolite accumulation under strenuous exercise conditions.

Finally, 100mg Alpha Lipoic acid added to aid in glucose uptake and utilization. Additionally combined with an electrolyte blend of 600mg Potassium, 500mg Sodium and 113mg Magnesium; all of which will further aid in muscular contractions, blood flow and glycogen synthesis.

When combined with L-Alanyl-L-Glutamine and L-Ctriulline as cellular hydrators, betaine as an osmolyte; there is a synergy with the 3 electrolytes for optimal cellular water balance and function which helps to protect cellular enzymes and other proteins against inactivation / degradation.

Additionally find out more about the product here. 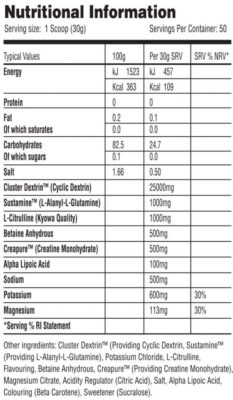