Basic combines some of the most studied, proven, and effective natural ergogenic aids available in one convenient daily drink. Many of the ingredient’s benefits are more pronounced when supplemented with daily over a prolonged period, enabling levels to reach saturation. Basic is suitable for anyone that wants to get the most out of their training, no matter what the sport.

HR Labs Basic – the question isn’t why would you use it but why wouldn’t you!?

We all know that supplementing with tried and tested compounds such as Creatine Monohydrate can significantly improve performance, although it’s often the case that we may not use them as often as we should to truly maximise the potential benefits.

Here’s a for instance – your pre workout may contain Beta Alanine but it’s unlikely that you are going to be using it 7 days a week. Beta-alanine works by enhancing muscle carnosine concentrations. Research has shown that Beta Alanine benefits are most effective when you supplement with it for extended periods, with studies indicating that doses up to 6g daily for 4 weeks or more leads to more sustained levels of muscle carnosine levels. An average across all studies suggested that 179g was where benefits were most significant!

Another study has shown Beta Alanine to be effective at 6.4g daily but this was split into several smaller dosages so it’s real world application maybe isn’t great as the associated paraesthesia (the tingles!) and digestive discomfort at a single bolus dose would be too much for most and the headache of taking multiple doses daily just isn’t convenient for a modern, hectic lifestyle.

Most people can easily tolerate 3.2g, the dosage genuinely considered to be ‘clinical’ that’s found in a number of pre workouts, including DEFIB.

BASIC ensures that you are hitting that 3.2g every day, with 6.4g being consumed on training days dependant on your Pre-Workout of choice (NB: choose Defib)

Creatine is King when it comes to time proven effective supplementation. Its effectiveness can’t be questioned and has stood the test of time. It’s been proven to increase performance, power output and recovery as well as promote a multitude of associated health benefits. Supplementing with 5g daily is enough for most which is why we’ve included this in BASIC – if you are a giant maybe up the dose but for most 5g is fine.

Betaine Anyhdrous supplementation at 2.5g daily over prolonged periods has benefits which are not dissimilar to creatine. These include increase performance, power output and may also lead to improved body composition (less fat more muscle) over time.

Peak O2® is an adaptogenic mushroom blend of 5 strains headed up by Cordyceps Militaris which enables your body to positively adapt to the stresses of training and intense exercise, whilst increasing power and endurance by improving oxygen uptake. Benefits are similar to Beta Alanine but the mechanism of action is different. Some people choose one or the other but ideally, why not use both? There is 2g in BASIC, widely considered to be the clinical dose. If you also have Defib and Level Up in you arsenal you would be hitting 4g on training days! 28g is all that’s needed to reap all the associated benefits Peak O2® has to offer. The more you take daily, the quicker you’ll get there but with BASIC you’ll be loaded up in just 2 weeks.

We round out basic with 1g of Taurine. An amino acid that has a multitude of performance benefits in addition to positively impacting cellular hydration and electrolyte balance. Cocomineral™, pure organic coconut Powder to again aid with Hydration. Something which is often overlooked but has an enormous impact on performance, cardiovascular health, and health in general and 500mg of Pink Himalayan Salt.

50mg of Astragin® is included to ensure that absorption is maximised. Increasing nutrient uptake and bioavailability of the key ingredients in BASIC. We are not kidding either, Astragin® has been proven to increase Creatine by 33% and Beta Alanine by 25%. There is also positive data on gut health and immune function. It’s pretty epic!

BASIC – things we SHOULD be doing daily. If you are going to take one supplement, make sure it’s this one. Made for Progress!

Additionally find out more about this product here. 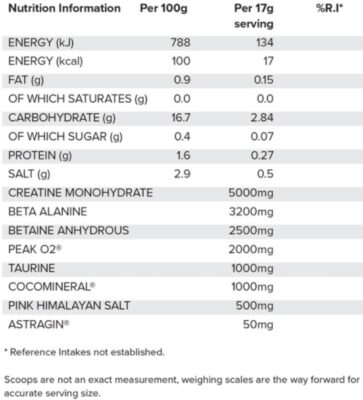 Basic is stimulant free so can be enjoyed at any time of the day, 7 days a week. We would, however, suggest not having it near your pre-workout on training days to avoid any digestive discomfort. Mix one scoop (17g) with 300-500ml of iced cold water, shake well, kick back and relax.  Allergen Advice: Manufactured in a facility that also handles Cereals including Gluten, Egg, Soya and Milk. Suitable for Vegetarians & Vegans, Halal Certified.